Could AI be the answer to our productivity woes?

Regardless of the technology hype, we’re in a productivity slump worldwide. Will it rebound as robotics and AI deliver a boost?

A couple of weeks ago I attended the OECD Global Forum on Productivity in Sydney with the not so snappy title “Keeping pace with technological change: The role of capabilities and dynamism”. My main take outs from the forum were lack lustre productivity performance across the OECD and speculation about whether the current malaise is just the lag between investment in new technology now and the pay-off to come.

First, some tech and productivity history. This graph tells the story of US productivity over the last 70 years.1 (some other advanced economies had a similar experience although the ICT productivity boost, in particular, was the most pronounced in the US.)

The big question is what to expect next? John Fernald, described by The Economist as “the foremost authority on American productivity figures” asked in a recent paper “Is Slow Productivity and Output Growth in Advanced Economies the New Normal?” He noted that

productivity growth has not yet shown signs of recovery …The biggest wild card for productivity growth is the future of technology, and the degree to which the gains from artificial intelligence and robots will spread more broadly across the economy. It could happen. We just do not know when.

Others point to the similarities between the present situation and the 1980s, when Robert Solow, observing the computer revolution, noted that “a technological revolution, a drastic change in our productive lives” had curiously been accompanied by “a slowing-down of productivity growth, not by a step up”. This combination of widespread productivity-enhancing technology and slow measured productivity growth became known as the “productivity paradox”. It was not resolved until the mid-90s, after a productivity step-up appeared in the data.

Yet the step-up lasted for only a decade, supporting the arguments of Robert Gordon and others that ICT has somewhat less dramatic effects that the technology that fuelled prior industrial revolutions.

MIT’s Erik Brynjolfsson and his colleague Chad Syverson at the University of Chicago both presented at the Sydney forum.2They argued that we’re in the midst of a modern “productivity paradox” and moreover, that such paradoxes are just an example of a more general phenomenon when a general-purpose technology diffuses through an economy.

General-purpose technologies are the “defining technologies of their times” and can radically change the economic environment.

They can be products, processes or organisational systems but fit four criteria:

Electricity is a good example of a general-purpose technology – it became pervasive in homes and factories and successive improvements reduced its cost and improved reliability.  And there were spillover benefits for households and workers in the form of safer cleaner environments. The modern washing machine, for example, replaced my grandparents’ “copper” which had a habit of exploding. (Once it spectacularly destroyed the wash house and left both my grandparents with serious burns.)

Some characteristics of general-purpose technologies help to explain delayed productivity effects from their introduction:

Brynjolfsson and Syverson say that this pattern of early investment and later rewards creates a productivity “J-curve”. Measured productivity growth slumps in the investment phase, rising as the technology spreads to other firms and transforms production and economic performance. 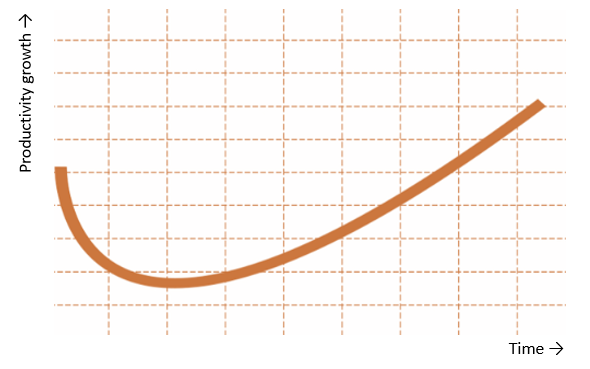 This curve can stretch out over many years. For example, the technologies driving the British industrial revolution led to “Engels’ Pause,” a half-century-long period of capital accumulation and industrial innovation but also prolonged wage stagnation. Electrification is another general-purpose technology that radically changed production processes, but it took decades. The IT revolution took roughly two decades.

Where are we, technologically speaking? Brynjolfsson and Syverson think that AI (or, more specifically, machine learning) is the next general-purpose technology. Yes, the robots really are coming, but not just yet. The most impressive capabilities of AI are yet to diffuse widely. Like other general-purpose technologies, their full effects won’t be realised without waves of complementary investments by adopting firms. And those firms face adjustment costs, organisational change, and further skills development.

If Brynjolfsson and Syverson are right they could have hit on the explanation for the decline in measured productivity growth in many countries over the last 15 years. But we’ll will only know that for sure with hindsight. We certainly can’t know where the world’s economy is on the J-curve exactly. Brynjolfsson and Syverson are saying it’s somewhere on the downward slope before we get the step-up in productivity on the back of the wide diffusion of the new general-purpose technology.

What does it all mean for us down here at the bottom of the world? Here’s my take:

Will New Zealand have too many robots? My worry is that we will have too few.

Notes
1. The 70 year productivity graph is based on John Van Reenan, which in turn is based on data from John Fernald
2. The presentations by Chad Syverson “The Productivity J-Curve: How intangibles complement general-purpose technologies” and Erik Brynjolfsson “What can machine learning do and what does it mean for the economy?” at the OECD Global Forum on Productivity, Sydney 20-21 June 2019 should soon be available on the Global Forum’s website.