Is the future of work happening now? 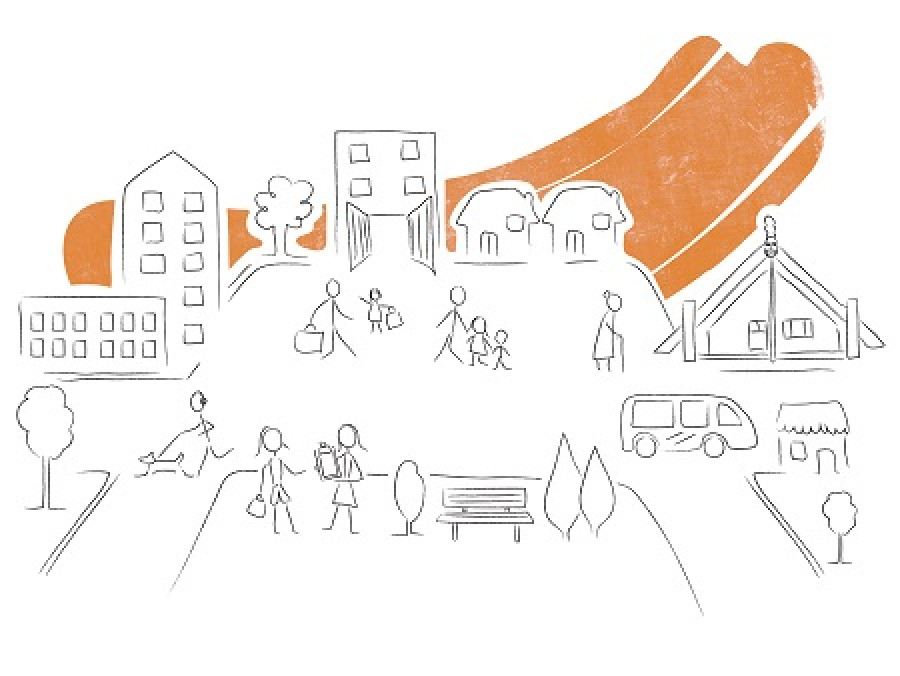 Many people worry about the impact of new and emerging technologies like robots and artificial intelligence on the number and quality of jobs. But we tend to overlook how frequently the labour market changes in the ordinary course of events, and the role that technology plays in this change.

We can see these developments in a couple of examples. Take bookstores. Reliable numbers are hard to come by, but available statistics suggest that New Zealanders are big consumers of books. For example,

Despite this, the number of people employed in newspaper and book retailing fell by more than half between 2000 and 2018, and the number of bookstores dropped by a larger proportion. What accounts for this?

Part of the decline could be down to economic circumstances. A recession linked to the Global Financial Crisis occurred in the middle of this period, and could have discouraged people from making discretionary purchases. However, bookstore and staff numbers continued to fall once the economy picked up.

A bigger factor is technology. Services such as Kindle and Kobo allow people to replace physical books with electronic versions that can be ordered anywhere (provided you have a reader or app) and received almost instantaneously.

And Amazon and Book Depository have challenged local retailers with a wider range of books and lower prices. Book Depository reported in 2018 that orders of books to New Zealand had increased by 45 percent in three years.

Number of newspapers and book retailers and employees in New Zealand, 2000-2018 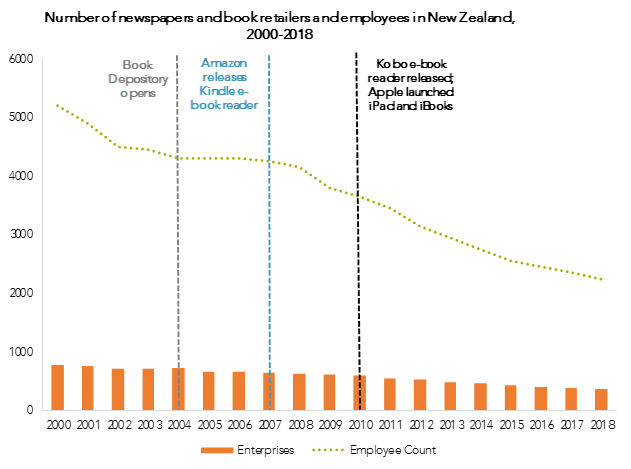 The New Zealand experience is not unique. A 2013 research paper noted that online sales of books “accounted for 44 percent of all U.S. book sales in 2012, with e-books accounting for 11 percent of total book sales”.

Of course, technology doesn’t just replace jobs; it also creates them. One of the more dramatic local examples is computer system design services. As New Zealand firms have made more use of information technology, they’ve needed more help setting up and maintaining computer systems. This has led to an explosion in the sector, with employee numbers increasing by almost 200% since 2000 and reaching 32,000 in 2018. 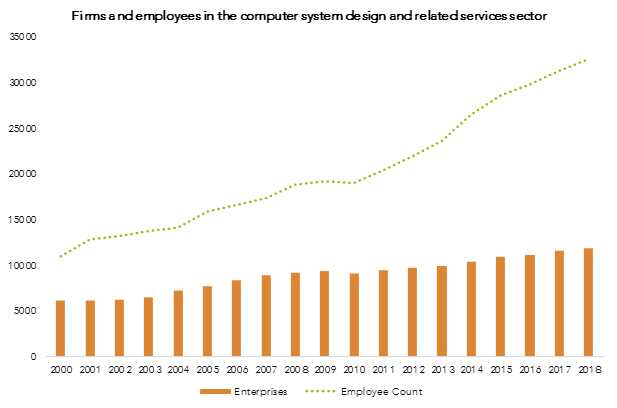 What to take out of all this?

First, change is a constant feature of the labour market. As new technologies spread, some sectors decline and others expand. Making sure that government policies support people to make smooth career transitions matters now, as well as in the future.

Second, the pace of change is an important variable. If technologies emerge and spread faster, job and career changes could be a more frequent occurrence for many New Zealanders, and we might need different policies to support them. These are some of the matters the Commission is exploring through its Issues paper and scenarios.

It’s all in the mix