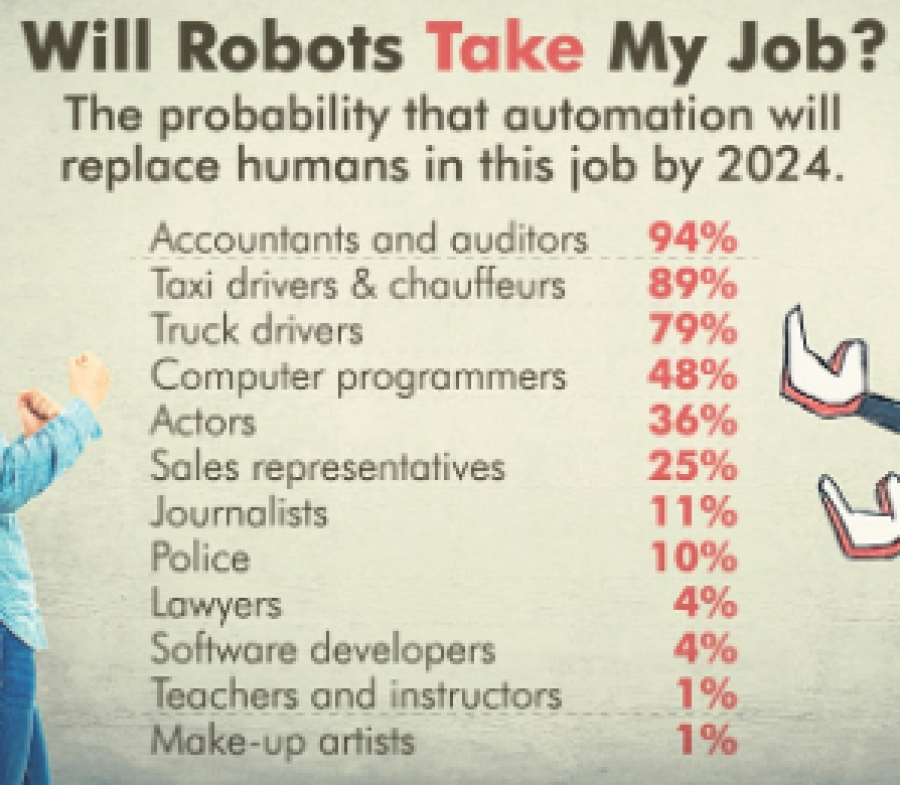 This graphic caught my eye. It accompanies the article Robots and Us in today’s Otago Daily Times.

Things look pretty dire for accountants and auditors – 94% of jobs automated within five years. Time to start night classes and retrain. Becoming a software developer looks a safe bet – only 4% of jobs will be automated. But hang on a minute, don’t they do the same job as computer programmers? And 48% of their jobs will be automated away. Is it 4% or 48%? Should you trust these numbers?

In case this was a typo, I checked the source – willrobotstakemyjob.com. Here are the computer and software jobs it lists: 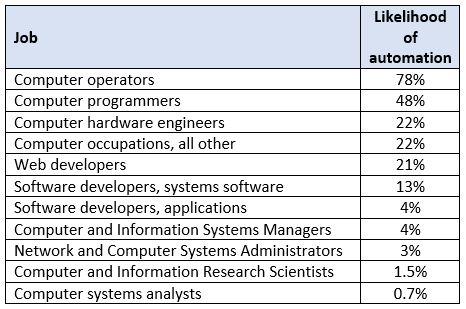 I can think of no reason for the wide dispersion. These jobs share core skills, and indeed people often move between them over the course of their careers.

What about truck drivers? 79% of those jobs automated by 2024! Four of five jobs will go – and with them approx. four of five trucks. This prediction may face a few minor snags … no doubt easily overcome. As at 2019, you can’t buy an autonomous truck. To my knowledge, they are yet to roam the open roads. Nor are there any factories to produce them. And no country has the legal and regulatory systems in place to handle safety certification, licensing and liability. Let’s be super optimistic and assume those snags could be overcome in three years. That leaves just two years for those newly constructed factories to produce enough autonomous trucks to replace 80% of those currently on the road. And they will need to sell at a price attractive enough that current truck owners are happy to junk most of their existing fleet. I’d say the chance of all these things coming together by 2024 is vanishingly small.

willrobotstakemyjob.com says its analysis is based on the 2013 Frey and Osborne report The Future of Employment: How susceptible are jobs to computerisation? The methodology in that paper underpins many, if not most, of the job loss predictions currently doing the rounds. This methodology uses attributes of the job itself while ignoring wider demand for the outputs of those jobs. The breakneck automation of trucking, accountancy etc. cannot happen without, believe it or not, substantial numbers of computer and software professionals. So those professions will likely expand rather than contract, notwithstanding their susceptibility to automation.

Predictions are easy to make. And scary predictions are more likely to be published. Should you take these ones seriously? For me, they fail two tests – consistency and plausibility.. Then again, I’m an economist. And there’s a 43% chance of a robot taking my job within 5 years…