Offshoring US manufacturing to China – it changed politics, but did it reduce jobs? 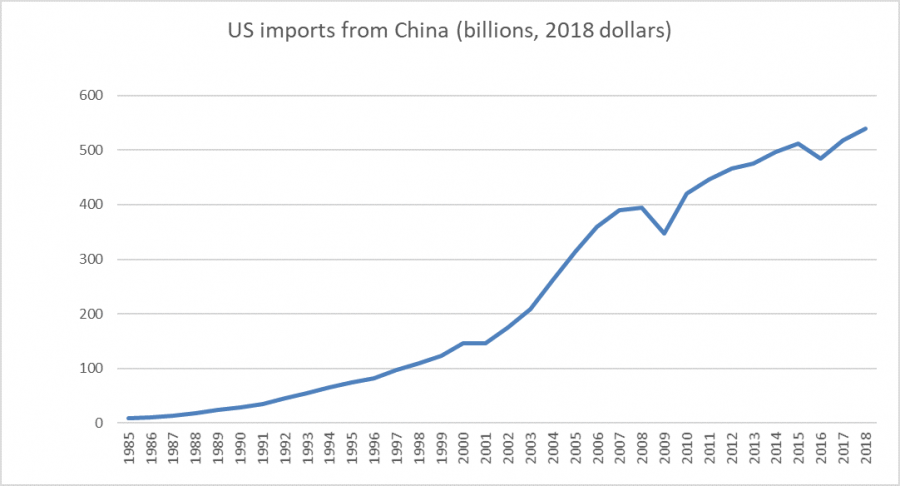 The US–China trade war is in the news again. The “war” is motivated, at least at the US end, by the story that opening US borders to Chinese manufactured goods in the 90s and 2000s gutted US manufacturing firms, destroyed up to 1.5 million manufacturing jobs and led to widespread unemployment. Frustrated workers, particularly in the mid-West, changed their voting allegiances, supporting and electing an unconventional Presidential candidate in 2016 …

Nicholas Bloom from Stanford University presented a keynote on May 3rd at the Society of Labour Economist’s annual conference that picks apart this story. I was fortunate enough to be there.

Second, he looked at manufacturing firms. The great majority of these survived import competition from China, and on average prospered. Bloom found no net reduction in employment.

Third, he looked at establishments (plants) operated by those firms. Some plants closed, and many others remained open but changed industry code to research, management or wholesale. Industry code switching confounds measurement, as such changes reassign workers from one industry to another, even if those workers retain their jobs. Overall, Bloom found that most manufacturing job losses occurred at large, high-wage, importing firms that simultaneously expanded non-manufacturing employment.

Fourth, he looked at regional effects. In low human-capital areas (generally South and mid-West) manufacturing jobs were lost due to plant closure without much offsetting service-sector employment. The story was different in high human-capital areas (generally West and East Coast), where “manufacturing job” loss was primarily from plants shifting to services.

Does this analysis support the political story? Yes and no. The China trade shock was real and created winners and losers. Measurement artefacts and a failure to look beyond first-round effects have misjudged its aggregate effects on “manufacturing” employment. But there are definite winners and losers, and those are clustered geographically.

What can this study tell us about technological change and labour markets? At the firm level, shifting manufacturing from the US to China has the same economic effect as adopting a cost-reducing production technology. So, these takeaways seem reasonable: