Scenarios and choosing a future 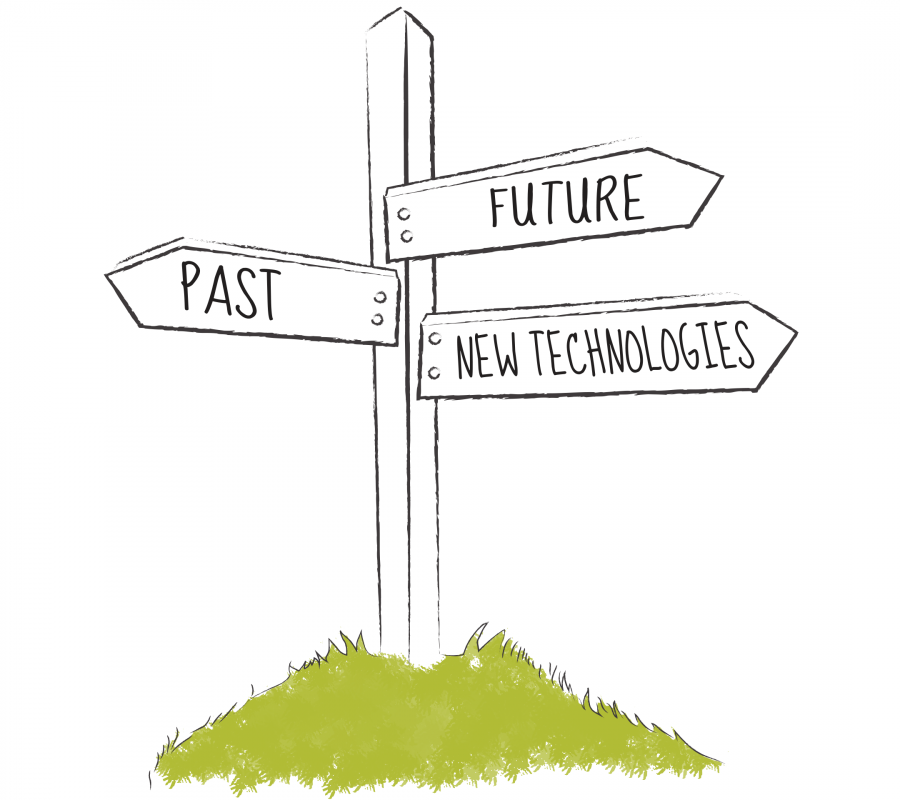 Can New Zealand choose its own future of work? The submissions and feedback the inquiry has received to date reflect some differing views of the purpose of scenario modelling.

InternetNZ see scenario modelling as a tool for shaping the future:

We think it would be beneficial to pick a preferred scenario, which lines up with the policy goals and wellbeing outcomes. With a preferred future in mind, workers, firms, and governments will be better equipped to work towards a desired outcome.

Likewise, Rohan MacMahon and others see an opportunity to choose a desired future state:

Of the four scenarios posed by the Commission, we see Scenario 1 (“more tech and more jobs”) as clearly delivering the best outcomes for New Zealand. …Accordingly, our comments in response to the Commission’s two critical questions use Scenario 1 as the desired future state.

The Public Service Association sees scenario development as an opportunity to reflect the values and principles underpinning a collective vision for the future:

We welcome the idea of developing future scenarios. …The scenarios developed by the Commission concentrate on labour market developments and productivity. Although these are important elements of the future of work in an age of technological change, we recommend a reflection of values and principles that should underpin our vision for the future.

Chartered Accountants ANZ support the use of scenario modelling to guide policy in a world of deep uncertainty:

Predicting future technological developments, or even the rate of change in technological adaptation, is a particularly difficult and fraught exercise. The same is true for attempting to predict how the labour force will change. Previous predictions that technological developments would result in higher productivity and fewer hours worked each week (for example, by Keynes) have not been borne out. For that reason we think it is important to consider a wide range of possible future scenarios and what policy options may be needed, but only implement policy changes where there are clear economic or labour market shifts.

As do Geoff and Esther Meadows:

The illustrative scenarios approach to the Inquiry is supported. It would not be sensible to predict a single future and offer corresponding one-dimensional policy advice.

This divergence of views reflects two distinct and valid purposes of scenario modelling:

To date, the Commission has used scenario modelling for the first of these purposes. 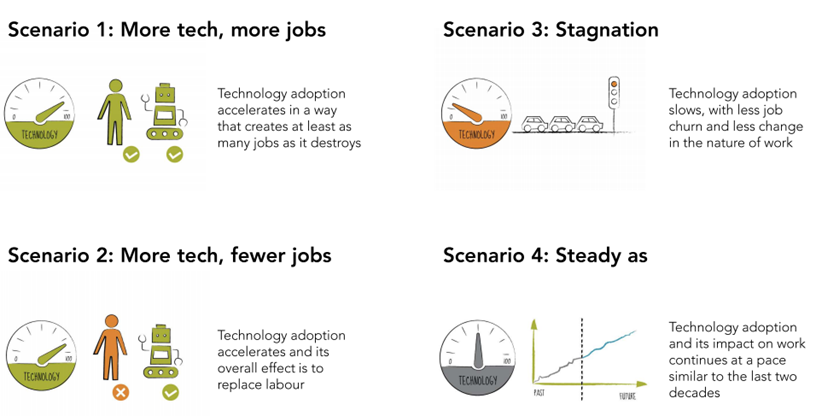 Image: the four scenarios in the inquiry’s issues paper

That does not rule out using scenario modelling for the second purpose, though we would need to develop different scenarios for that purpose. (See, for example, the four scenarios developed by the RSA future work centre, each described as “a vision of positive change”.)

In making a choice, it would be good to realistically explore just what factors New Zealand has “choice” about, and the factors with which it may not.

This post is my current take on these questions.

The wider future of work discussion to date has been informed by academics, the “big four” multinational consulting firms, and organisations such as the International Labour Organisation and OECD. Their publications generally assume that automation technologies are (or will shortly be) globally available and that their labour-replacing effects on industries and occupations will be the same everywhere.

However, the predicted effects on countries and regions may differ. McKinsey, for example, estimated in their “earliest adoption scenario” that 29% of NZ and 46% of Japanese workers will need to move out of their occupational category to find work between 2016 and 2030. It is my understanding that such between-country differences arise largely because the current makeup of industries and occupations differs across countries, and because firms in countries with higher wages will adopt labour-replacing technologies earlier1.

The analysis of McKinsey and others is consistent with a single global future of work scenario that plays out faster or slower in different places, with the speed depending on many factors. In any one place, only some of these factors are amenable to policy control. Places are likely stuck with the global scenario but have some choices around policies that affect timing (and perhaps more choice over adjustment policies).

Might New Zealand be a special case? Well its economy has some unusual features. It is small and remote (a topic recently explored in Michael Reddell’s blog). It is “open”: it has a free flow of knowledge with the rest of the world and is exposed to international prices for traded goods and services. Also, international labour prices affect local labour prices through trade and migration (eg, people moving in and out of New Zealand as relative wages and the availability of work changes). New Zealand has a larger primary and smaller manufacturing sectors than otherwise similar countries, so technologies like industrial robots may have less effect here. Kinley Salmon, for example, concludes that the labour market effects of tech will be lower here than in the rest of the developed world.

Slower tech adoption has an upside. New Zealand gets time to observe the effects – good and bad – of tech adoption elsewhere and the effectiveness of other countries’ policies to mitigate downsides. Others’ experience can then inform local policy responses.

Can New Zealand choose a more favourable scenario than the globally “imposed” one? A lack of control over broad global trends does not mean that outcomes here will be identical to those in other countries. Broad policy settings in New Zealand are an important influence on the relative prices for capital and labour, which in turn influence the profitability of tech adoption and its diffusion through the economy. Does this mean that New Zealand can go it alone and choose a more favourable scenario than that which plays out globally? I think this is unlikely because:

Asking the question another way, can New Zealand choose (deliberately or inadvertently) a scenario less favourable than that that plays out globally? I can see ways that could arise: for example if government offered significant backing to technologies that turned out unsuccessful, it actively discouraged tech that turned out successful elsewhere, or its actions led to the local mis-pricing of tech, goods or services. “Pick the winning tech” policies have featured in New Zealand in the past but have been less common in recent years.

This leads me towards some preliminary answers for the three “deep questions” posed above:

1 The methodology for the McKinsey’s MGI Automation Model is described in some detail in their January 2017 report A future that works: automation, employment, and productivity. The industry and occupational models are derived solely from US data. The report describes several factors that could differ by country (eg, GDP growth estimates and labour costs). The relative contributions of each factor are proprietary, making it impossible independently assess of the veracity of their methodology or predictions.