Technological change and the future of love 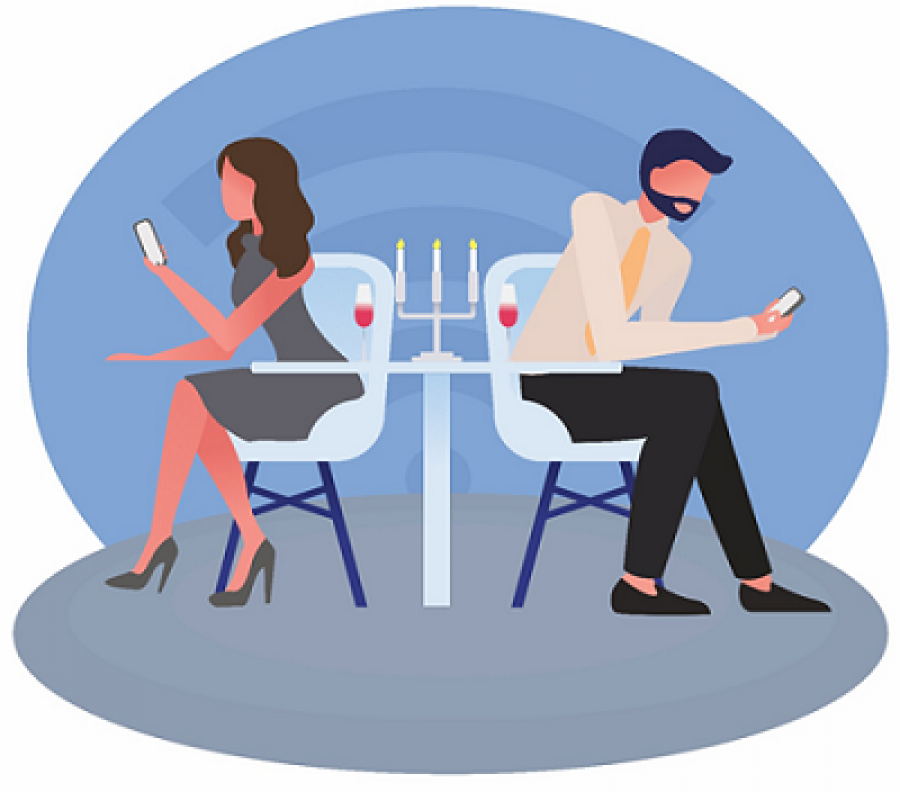 Online matchmaking has radically changed the way people search for love. Digital marketplaces for romance offer more choice, fewer constraints, and potentially less risk than “traditional” ways of finding prospective mates. How much has this changed the nature and quality of people’s romantic relationships?

In a similar way, digital labour market platforms change matchmaking for workers and employers, and how work is organised. But how much will they change the nature of employment relationships and the quality of jobs?

Maybe we can find some answers, or at least some good questions, by looking at the rise of online matchmaking.

This striking chart is from Disintermediating your friends, a new National Academy of Sciences research paper by Michael Rosenfeld, Reuben J. Thomas & Sonia Hausen. It presents USA data for heterosexual couples aged 19+ from the How Couples Meet and Stay Together (HCMST) surveys of 2009 and 2017.1

How heterosexual couples in the USA met, by year of relationship start

Within a generation, meeting online became the most common way for heterosexual relationships to start. They disrupted the old market in two waves, “disintermediating” friends and workplaces from their role in matchmaking. Families (mostly mothers), neighbours, churches and schools were already going out of business.

The first wave of online matchmaking kicked off around 1995 with graphical internet browsers and the unforgettable (no matter how hard I try) schmaltz of You’ve Got Mail (1998). The proportion of new relationships that started online plateaued around 20% in the mid-naughties and up to this point, they hadn’t much affected the role friends played in setting up relationships.*

Smartphones triggered the second wave, shifting the dating market from the desktop to everywhere. Relationships started online overtook meeting via friends by 2013 and reached nearly 40% by 2017. Phone dating apps such as Tinder were now replacing rather than complementing the role of friends. 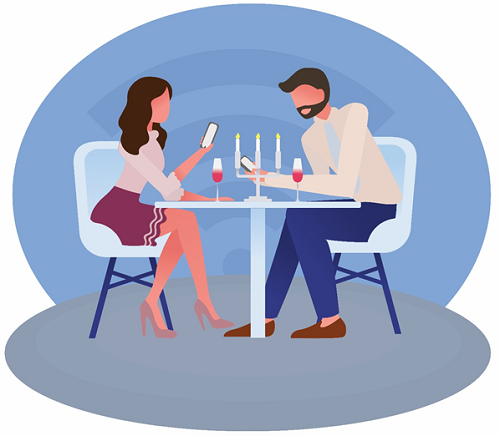 For same-sex couples, the change was greater and much faster. Meeting online surpassed meeting via friends in 2001, rocketing to nearly 70% by 2009. This next chart is from Rosenfeld and Thomas’s 2012 analysis of the first 2009 wave of HCMST data (I’ve not found an update using the 2017 data).2

Technological changes that affect something as socially fundamental as sexual relationships and family formation are bound to raise big questions and prompt concerns, just as they do in relation to the future of work.

Societies will differ widely, but for the USA, the HCMST research suggests that fears a tech-driven dating apocalypse4 is undermining stable relationships are over-hyped or simply false. Matchmaking has changed, but relationships themselves are going steady.

Online dating doesn’t lead people to shed all their preferences and habits for dating within their own ethnic, religious and class groups. Some researchers have been surprised at how little such dating preferences have shifted. But if intermarriage is the goal, there’s been progress. Ethnic intermarriage in the USA stepped up following the launch of successive new matchmaking platforms: Match.com in 1995, OKCupid in 2004 and Tinder in 2012.6

Percentage of interracial marriages among newlyweds in the US 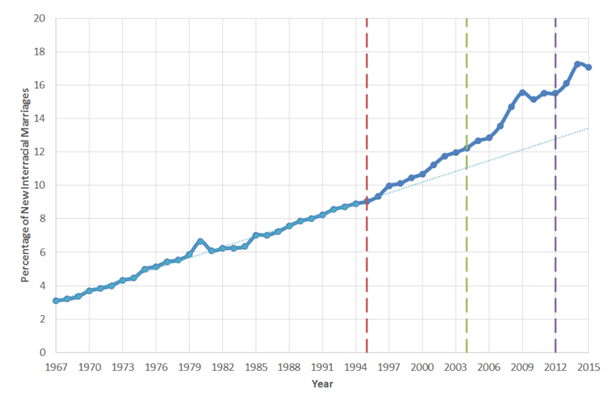 Lessons for digital labour market platforms and the future of work

The rise of new matchmaking technologies for romance may offer insights for our inquiry into how technology may change the future of work.

First, a “but”. Work is not romance. The motivations and power dynamics of employers and workers searching for matches on labour market platforms are different and may not be as symmetrical as those in dating markets.

That said, here’s my list of take-outs.  Feel free to add your own.

* The HCMST survey allows multiple responses. Meeting a partner through friends’ social media networks would tick both boxes, so the first wave of new matchmaking technology often complemented the friendship networks.  Similarly, the rise in bar/restaurant meetings since 2000 is entirely due to online matches meeting in person at these venues.

3. Rosenfeld, M. (2017) How Tinder and the dating apps Are and are Not changing dating and mating in the U.S.Presented at 25th National Symposium on Family Issues “Families and Technology” Penn State University. October 2017. https://web.stanford.edu/~mrosenfe/Rosenfeld_Tinder_and_dating_apps.pdf