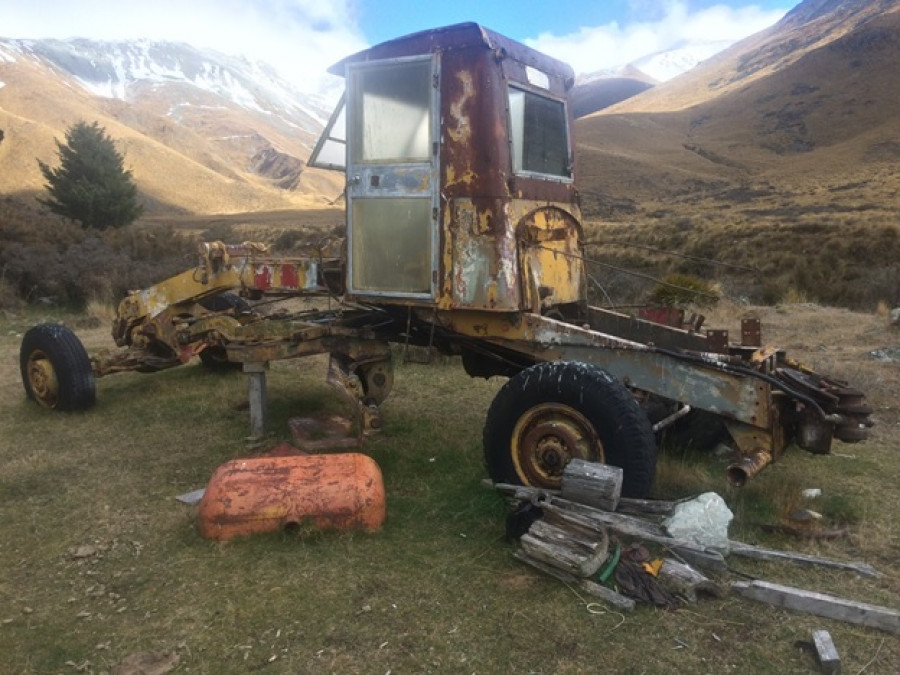 Crazily low interest rates but NZ businesses are not investing. Why not?

It’s an important question, and one for which I’m yet to hear a good answer. Low business investment is a problem for tech adoption and, as a consequence, for labour productivity and income growth. As the Commission says in its recent draft report Employment, labour markets and income: “high-income economies are characterised by highly skilled workers with high capital-intensity jobs and the rapid uptake of emerging technologies”.

The blue line on the graph shows the nominal housing interest rate for a first mortgage between 1972 and 2018.1 I’ll use this as a proxy for the lowest interest rate a firm might be able to borrow at.2 The red line is the real interest rate, that is, adjusted for inflation (using the consumer price index – the green line). This can be thought of as the actual cost of borrowing. 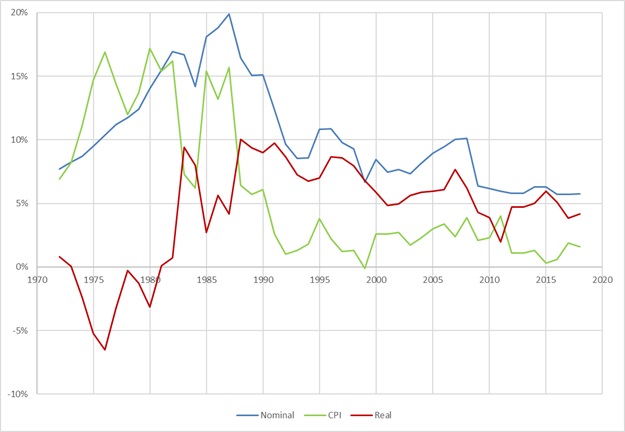 And here’s business investment as a proportion of GDP over the same period.3 Business investment fell dramatically in 2009. It has picked up a little since then, but still falls well short of values typical for the 80s, 90s and 2000s. 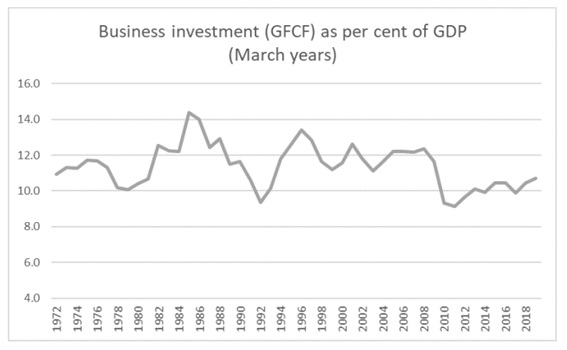 This data confirms that New Zealand has had both low interest rates and low business investment over recent years.

Everyone seems to agree that NZ is capital shallow (ie, has a relatively low levels of firm investment in capital per worker). This contributes to NZ’s poor productivity performance.

It is less clear whether such a difference is sufficiently material to explain the differences in business investment. At least in theory, investment decisions are made with reference to a hurdle rate. The essential idea is that a project should only go ahead if its expected rate of return is above the hurdle rate – otherwise the firm has a better use for those funds. Hurdle rates vary by project risk. As a rough guide, rates might vary from 10% for a “safe” infrastructure project up to around 30% for a “risky” tech project.

If a 1–2% difference in interest rates translated into 1–2% higher hurdle rates, then we would expect to see fewer business projects go ahead in NZ. But the projects we’d lose would be the marginal ones. The ones that offer a good return for businesses, and make the difference for the country’s productivity, would still go ahead.

So, I think we need to look deeper. In my next post I’ll explore the case that it’s not so much access to debt, but access to equity capital, that underlies the business investment problem.

Notes
1. Data from nz/chart/compare/34-56-139?from=1972 and data1850.nz/chart/compare/33-60-137?from=1972.
2. The first mortgage housing interest rate is, by definition, secured against real property. Some business lending falls into this category, but the majority is less secure (from the perspective of the lender) and thus attracts a higher interest rate.
3. Graph from com/2019/11/28/investment-capital-and-all-that/ “GFGC” is short for “gross fixed capital formation”, which is a proxy for business investment in capital intensive items such as machinery.
4. See Chart 9 in Can the kiwi fly?