Why hang on to old tech? 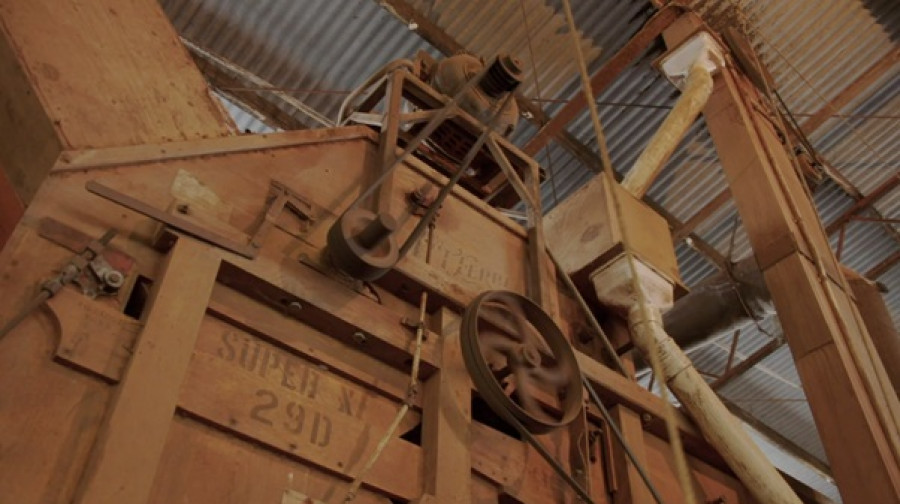 As the opening chords of Country Calendar play, feel-good nostalgia for rural New Zealand washes over me.

When I’m at my mother-in-law’s place every Sunday evening, more often than not we end up watching New Zealand’s longest running TV show.

A recent episode was about Uncle Joe’s – a Marlborough nut and seed business. I already knew about Uncle Joe’s, having previously bought their delicious hazelnut spread. But I couldn’t help also thinking about our tech change and future of work inquiry.

I was most struck by Uncle Joe’s approach to technology. They have hand harvesters for walnut trees and a single person packages the spreads (including sticking labels on by hand). But machine tech also supplements “hand tech”, for example an automated walnut cracker has replaced a traditional hand cracker. And Uncle Joe’s uses others’ machine tech, including Garth Neal’s 70-year-old seed cleaner. (See photo: Garth Neal’s seed cleaner down the road from Uncle Joe’s – still going strong at 70 years young. Source: TVNZ, 2019.)

It got me thinking about different ways technology can come (or not come) into a business, and about what this means for the future of work.

In my work on transitioning to a low-emissions economy, I came across a paper by Adam Jaffe1, Richard Newell and Robert Stavins about technological change and the environment. Using examples such as the mechanical reaper of the nineteenth century and the widespread use of hybrid corn seed through to the use of robots in factories, the paper explains that the diffusion of new, economically superior technologies is a slow process.

There are two main explanations for the slow diffusion of new technology:

The two main models of diffusion in the literature each emphasise one of these two aspects.

The probit model seems to provide a good explanation for the diffusion path of things like new energy technologies. Roger Fouquet and Peter Pearson explain that even when a new energy technology offers enhanced characteristics (such as ease of use or cleanliness) these may only persuade a few users to switch. It is not until the price of the tech falls sufficiently that is starts to displace existing tech for the vast majority of users.3

In contrast, the epidemic model presumes that the primary factor limiting diffusion is information. People or firms who have actually tried the tech are the most important source of information about that tech for potential adopters. Technology spreads like a disease, with the instigation of adoption being contact between those who have already adopted and the ‘uninfected’ population.

Getting back to Uncle Joe’s and Garth Neal’s seed cleaner – from the outside we can’t know how or why these firms have made the decisions they have about the technology they use. The relative cost of a new seed cleaning machine may make the 70-year-old seed cleaner still superior. Or the owners of these firms don’t know anyone who has tried out newer suitable technology.