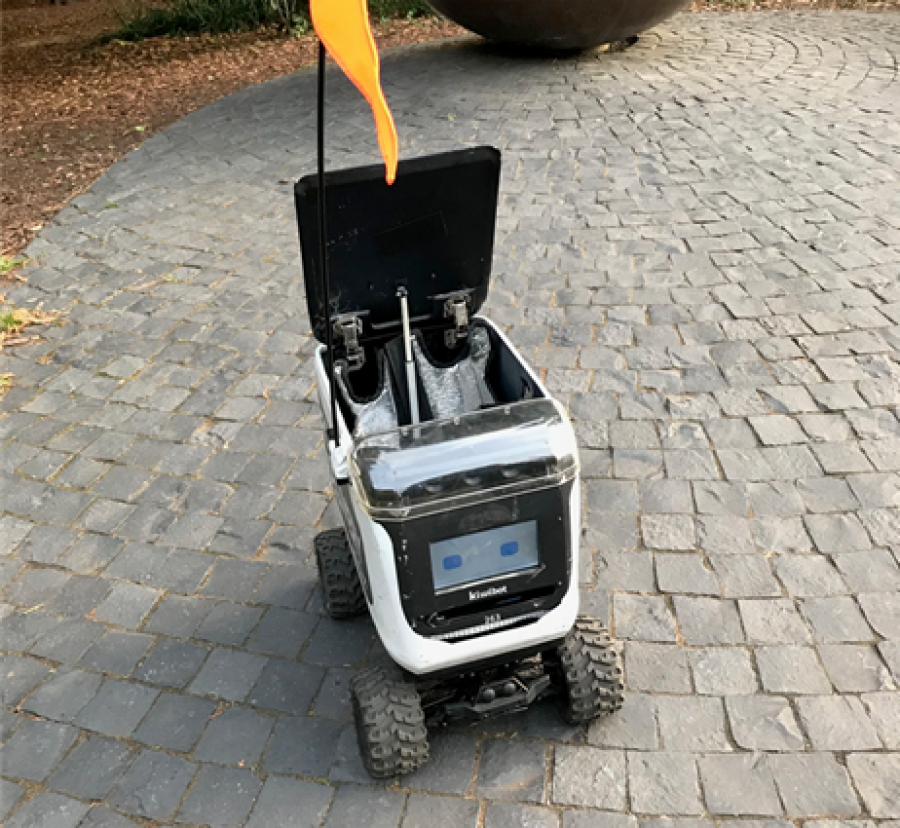 In Berkeley, California last week I met the Kiwibots – a tribe of 4-wheeled robots about the size of a family chilly bin. They drive around the university campus and surrounding streets, delivering food and drinks to people who are too busy, too lazy, or too infatuated with these cute little machines to get up and feed themselves at one of the hundreds of local food outlets.

Why “Kiwibot”? I don’t know. They’re not brown, furry or nocturnal. And they’re not alone. They’re pursued by their strikingly similar six-wheeled cousins Starship, who are running around Milton Keynes and the campus of George Mason University, and Amazon’s Scout delivery bots in Seattle and Irvine.

These and other companies are all trying to find ways to automate the ‘last mile’ of the delivery supply chain to clients’ doorsteps – whether on wheels or with drones. This involves navigating through complex environments, coordinating delivery of packages to different destinations in the most efficient way possible. And the test projects are as much about understanding and shaping social reactions to the machines as they are about testing the hardware and software involved.

Following a Kiwibot through the Berkeley campus and up a side street to a frat house, I saw it veer drunkenly from one side of the path to the other. It stopped and started repeatedly as it reacted to passing people, paper bags and squirrels, or as it faced fixed obstacles such as fallen branches, litter, signposts and curbs. I didn’t get to see one trying to cross the street (not to mention going up stairs – the traditional nemesis of the Dalek…).

For all the impressive AI, sensing, GPS mechanical technology in play, it’s clear that these delivery robots have a long way yet to go before they can cope with the complexities of a human and natural environment. The robots struggle to do a fraction what comes naturally to the three-year-olds who often follow them around the streets. I was reminded of David Autor’s paper that mentions the difficulty of teaching machines to do things that small children could achieve easily. Robots are far better at managing tightly prescribed circumstances with routine tasks. 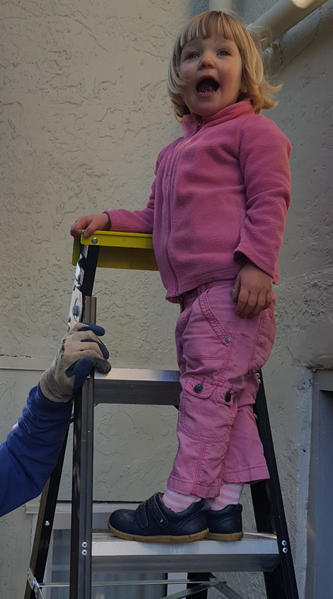 A ladder is child’s play for a toddler, less so for a Dalek…   Source: Amelia Sharman

In fact, the whole exercise seems extremely labour-intensive at this stage in development.

My robot-delivery take-outs from my encounters with the Kiwibots is that automating the ‘last mile’ of the supply chain remains a huge challenge even in welcoming environments amongst campus-loads of tech-friendly millennials. Top-notch AI and robotics still struggle where a high level of interaction is required with humans and the worlds we build around us. I expect there will be plenty of delivery jobs for some time to come, but if they involve working with these cool little machines, at least they’ll be a bit more fun.

1. John sent this post from the US, where he is currently at a class reunion for the Goldman School of Public Policy.
Go Bears!