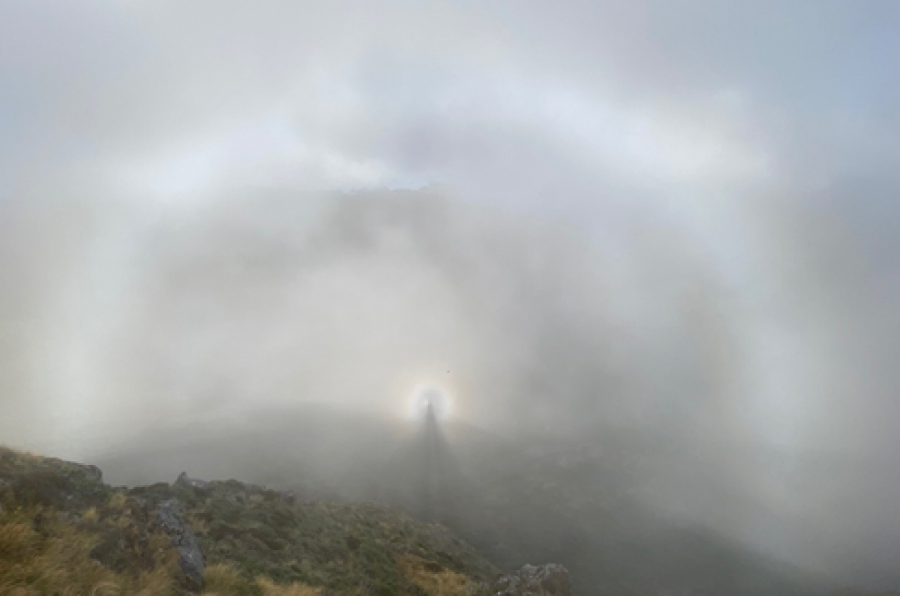 New COVID-19 cases are soaring in the US. I would naturally expect the number of deaths to be soaring too. But that has not yet happened – daily deaths remain well below their April peak. What’s going on? And is that good news? My nerdy tendencies led me to start by checking the data…

This graph shows the daily figures for new confirmed cases (blue line), new deaths (orange line) and my estimate of the case fatality rate (CFR).1 2 The CFR is best understood as the proportion of people known to have contracted COVID-19 who subsequently die from that disease.3 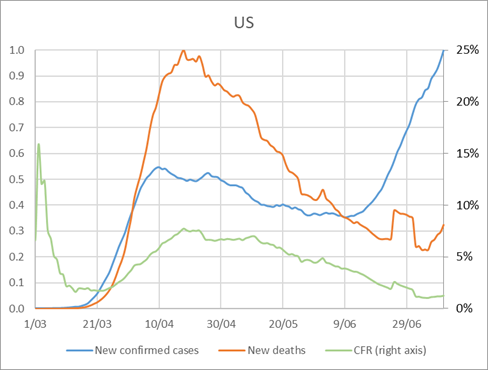 The CFR was very stable from mid-April through to mid-May; but has since fallen.4 The current CFR is approximately one-fifth of that for mid-April – a dramatic improvement. What might explain this?

Treatments have changed as medical staff have learnt from their experience with COVID-19 patients. For example, a shift in treatment towards non-invasive oxygenation has shifted concerns about a shortage of ventilators into concerns about a glut. So, it is at least plausible that better medical treatment means fewer of those who become seriously ill from COVID-19 are dying.

Does the falling CFR depend on having a rich-country’s health system? Let’s look first at rich countries that have been dealing with significant numbers of COVID-19 cases over a sufficiently long period to learn from experience. Sweden and Israel fit these criteria. Like the US, they experienced a peak of daily new cases in April; a peak since dwarfed by a recent resurgence.

Sweden’s CFR has been falling since late April. Israel’s CFR is more variable, but it is now much lower than it was through April and May.5 The experience of these three countries is not unique – indeed it is very similar to the world pattern (left graph below). Nor are these countries driving the world pattern (right graph).

Medical treatment of COVID-19 is improving, and this is a likely contributor to falling deaths rates. But this improvement does not seem to require a rich-country health system. It may well be the result of adopting simple inexpensive treatments, such as awake prone positioning rather than invasive mechanical ventilation and the steroid Dexamethasone.

Is society getting better at segregating and protecting those at higher risk?

Many COVID-19 deaths have been in old-age care homes. According to one study, there are more COVID deaths in European countries where the elderly tend to live in care facilities. Early-hit US states lost a high proportion of their care home residents to COVID-19 – 5% in Michigan, 6% in New York and 12% in New Jersey. Death rates (so far) in later-hit states are considerably lower – 1.6% in Florida, 2% in California. This improvement is probably due to better policy and procedures, and the availability of personal-protective equipment.

Anthony Fauci, director of the US National Institutes of Allergy and Infectious Diseases, recently attributed the country’s falling CFR to two factors. The US has gotten better at treating people, particularly through therapies that work in the advanced stages of the disease. And the mean age of those getting infected has dropped by about 15 years.

The drop in the mean age could be a pure side-effect of better segregation of older people, particularly those in care homes. It could also arise from an increase in risky behaviour by younger people.

Has the virus evolved to become less deadly?

Transmissible disease pathogens are subject to strong selection pressure. Outbreaks of viruses like Ebola can be contained relatively easily, because the virus kills its hosts quickly and spectacularly. By contrast, the common cold is much more successful. It spreads quickly and easily, and while being highly annoying it is rarely lethal. Indeed, ultimate success for a virus is to assist, not hinder, the reproductive success of its hosts.

Rising new cases and a falling CFR are consistent with the virus becoming more easily transmitted and less lethal. But I’m not aware of any strong evidence of genetic mutation linked to changed transmissibility or lethality. So, the jury is still out on this one.

Many of the people infected with COVID-19 are asymptomatic, that is, they develop no symptoms, or only weak symptoms that could be overlooked or mistaken for other minor illnesses (eg, the common cold). Virus tests have been rationed in many countries, particularly during the early stages of the pandemic. Increased rates of virus testing could be expected to identify more asymptomatic cases, which would reduce the calculated CFR. (Expanded testing will also likely pick up pre-symptomatic cases, but this will not affect the CFR as they are just being confirmed earlier than they would otherwise be.)

Once a testing threshold is reached – where known contacts of infected individuals and those at high risk for other reasons (eg, aircrew) are tested – then any further expansion of testing is subject to diminishing returns. That is, don’t expect the next 100 tests to be as useful as the previous 100 tests. In particular, free on-demand testing may be over-subscribed by the “worried well” and under-subscribed by those with a higher likelihood of infection.

Overall, my judgement is that expanded testing may be making a small contribution to the reducing CFR. But it falls well short of being a primary factor.

Is there just a long lag between cases and deaths?

Individual deaths typically occur well after initial diagnosis, in many cases weeks after. Following this reasoning, we might expect a delayed surge in deaths following each surge in new cases. The CFR would be depressed, but only temporarily (until deaths caught up).

Such a lag is very clear in the data for Italy. 7 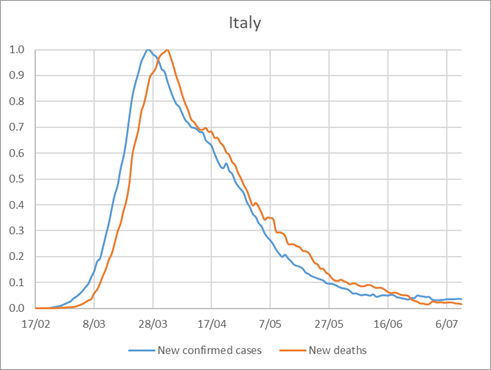 How long a lag? From the data, I estimate 5 days for Italy and approximately 14 days for Israel. By contrast, the UK data is not consistent with a fixed lag, and peaks in Swedish deaths appear to precede peaks in new cases. So, I have found inconsistent support for the idea that a peak in new cases is followed by a lagged peak in deaths.

This finding seems counter-intuitive. I suspect there are two reasons behind it. First, while some individuals experience a long illness after positive diagnosis, others may be diagnosed with COVID-19 when near or even after death. These “zeros” will pull down the average time between a confirmed case and subsequent death. Second, my graphs show all new confirmed cases, but only a small proportion of these people will die from COVID-19, and thus contribute to the new deaths curve. It is quite possible that those who subsequently die are atypical new cases.

At the world level, daily new cases have been rising for two months, while the CFR has been falling. Based on the data available, I think the falling CFR trend is real, and that we need not fear that it will rebound.7

The most convincing explanations are better treatment and improved segregation

The falling CFR trend for the US is real, and also apparent for the world in aggregate. The most convincing explanations are better treatments for seriously ill patients, and improved segregation of those in old-age care homes.

In my post How will the pandemic end? I raised the possibility that small improvements on multiple fronts could add up to a game changer.

To be clear, COVID-19 is a still a deadly disease and the world remains in the grip of the worst pandemic in a century.8 But there are grounds for hope. One day in the not-too-distant future the costs of living with the virus may fall below the costs of barricading New Zealanders away from it. That day, should it arise, will be a cause for celebration. But it may come with some very-difficult-to-resolve ethical and political dilemmas over re-opening New Zealand’s borders. 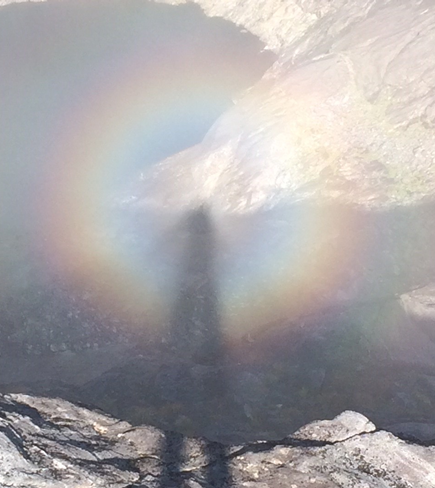 Notes
1. I calculate new confirmed cases and new deaths from the John Hopkins University CCSSE COIVID-19 dataset. The data covers the period 22 January to 11 July 2020. New confirmed cases and new deaths are 7-day moving averages, to flatten out weekend-related reporting spikes. I plot both variables as a proportion of the maximum value of that variable. This emphasises the shapes of the lines and the timing of the relationship between them.
2. I estimate the daily CFR as the “7-day moving average of new deaths” divided by the “7-day moving average of new confirmed cases”.
3.Calculating and interpreting the case fatality rate is complex. I recommend starting with this explanation at org.
4. The CFR curve shows a peak in early March. This is best ignored as it is based on a small number of cases. It also shows a temporary surge in daily deaths at the end of June. This is most likely due to retrospective reporting of deaths in New Jersey and New York.
5. Israel’s May CFR peak looks like it was driven by the low number of new cases, rather than a high number of deaths.
6. I chose Italy because (a) it has had lots of COVID-19 cases; and (b) the curves are the same shape; and (c) there is a clear lag between the curves. The pattern for other countries is not nearly as neat. For example, neither a positive nor negative lag improves the correlation between the curves for the UK.
7. I can’t rule out lags making some contribution to the falling CFR. One possibility is an interaction with improved medical treatment. Should recent advances merely delay rather than reduce deaths, and that delay is increasing over time, then we would observe a falling CFR.
8. A further issue, not explored in this post, is health consequences for those who survive COVID-19 infection.