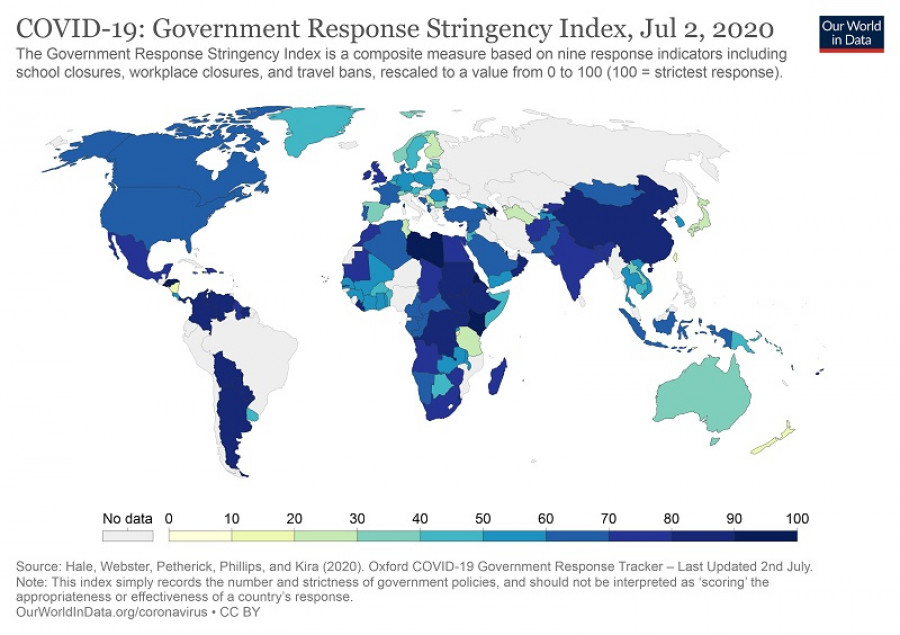 Much of the public debate about the response to the COVID-19 pandemic has focused on the extent to which government regulations have restricted personal and business activity.

Here in New Zealand, the question of when to change Alert Levels dominated the media and Parliament, with some arguing that the highly-restrictive Levels 3 and 4 caused too much damage to the economy and employment. Others argue that the period in lockdown and the resulting elimination of community transmission will allow our economy to rebound more quickly than expected, now that New Zealand has one of the least restrictive environments in the world (as can be seen in the map above). As this post was being written, governments in Victoria and the United Kingdom were introducing localised lockdowns for specific neighbourhoods or cities.

But what if government regulations are less important for economic recovery than we thought? That’s the conclusion that researchers in the United States and Europe are coming to.

The first piece of evidence comes from Raj Chetty and his Harvard colleagues, who have used private sector economic data to assess the impact of the pandemic on spending and employment in the US. There’s no end of fascinating insights in this paper, but one particularly interesting finding is that the easing of regulatory restrictions had less impact on economic activity than expected.

Chetty and his colleagues compared Colorado and New Mexico, where governments issued ‘stay at home’ orders at roughly the same time (24 March for Colorado, 26 March for New Mexico), but ‘reopened’ at different points (restrictions began to ease in Colorado on 1 May, and on May 16 in New Mexico). Despite these different easing dates, Chetty et al found “no evidence that the earlier reopening in Colorado did anything to boost spending during the two intervening weeks before New Mexico reopened.” And a broader comparison of other US states found similarly little impact of earlier regulatory easings on either spending or employment.

The second piece of evidence is from researchers at the University of Copenhagen, who compared consumer spending patterns in Denmark and Sweden. It’s widely known that Sweden has eschewed stringent government lockdowns during the pandemic, while Denmark closed schools, businesses and public places. Yet while the regulatory responses differed sharply, the impacts on consumption were much less so. Both countries experienced “a massive reduction in consumer spending”, with “a common component to both countries of around 25 percent, and an additional drop in Denmark of just under 4 percentage points as a result of the shutdown.”

Why so little difference in economic outcomes? The US and Danish researchers come to similar conclusions – what mattered most for the economic contraction was health concerns by individuals, rather than government regulation. Indeed, as Chetty et al find, “spending fell sharply in most states before formal state closures” – something that sounds rather familiar, given that New Zealand’s GDP in the March 2020 quarter fell by 1.6% (when only four business days of that period fell within the Level 4 lockdown).

But perhaps more pertinent for policymakers here and overseas is the corollary conclusion in Chetty’s paper:

“If health concerns are the core driver of reductions in spending rather than government-imposed restrictions, governments may have limited capacity to restore economic activity through reopenings, especially if those reopenings are not interpreted by consumers as a clear signal of reduced health risks.”

In other words, restoring economic growth requires giving people confidence that the virus has been controlled and they will be safe. Hopefully, New Zealand’s early success in stopping community transmission will allow us to recover faster. But if governments fail to provide clear and convincing signals of safety, or lose the people’s confidence after easing lockdowns, then all bets are off – regardless of what the Government Response Stringency Index map might say.