Eighty-four percent of New Zealanders were concerned about the chances that they or someone close to them would become seriously ill from COVID-19, according to a survey conducted on 3 May 2020.1 That’s a very worried population, but are their worries justified?

What’s the actual likelihood of someone becoming infected with COVID-19, and that infection developing into serious illness? Dave’s recent post re-opening the trans-Tasman border noted that active cases, standardised for the population size, is a reasonable proxy for the maximum likelihood that any (non-isolated) individual in that population is infectious.2 By his calculations, New Zealand had 42 active cases per million population as at 3 May.

So, going back in time to that date, the chance that the next person you randomly encountered was infectious was below 0.0042% – roughly 1 in 24 000.

Let’s say that your chance of catching COVID-19 from an encounter with an infected individual is 1 in 40. Furthermore, let’s say that you were encountering 200 individuals each month under the level 3 lockdown (that’s high but allows for the slight possibility of surface to human transmission). Only a small proportion – perhaps 5% – of COVID-19 infections lead to serious illness.3 Multiplying this out, the objective likelihood that that you would become seriously ill from COVID-19 from an infection caught in May is 0.0011% – roughly 1 in 95 000.

And perhaps a lot less risky than Dave’s holiday in the mountains this week!3

Your likelihood of dying from COVID-19

Risk to those close to you

Let’s further assume that you have 19 other people that fit the description of “close to you”. Their encounters will likely overlap with yours and with each other’s. So, rather than assuming each 20 people encounter 200 random others (ie, 4 000 individuals outside the close group), let’s assume that the group encounters 1 000 individuals. This leads to an objective likelihood that you, or someone like you, will become seriously ill from COVID-19 of 0.0053%, or roughly 1 in 19 000.

Some of these assumptions are arbitrary, and we invite you to substitute your own and run the maths. But it’s hard to easily reconcile the objective likelihood of you, or someone like you, becoming seriously ill from COVID-19, with a report that 84% of the population were concerned. What might be going on here?

Economists pay a lot of attention to risk – best thought of as a combination of two factors: the likelihood of an event occurring, and the seriousness of the consequences of that event should it occur. They further distinguish between perceptions and objective measures of those factors and they’ve found that people’s perceptions are often misaligned with reality.

Economists, working with psychologists, have found that:

A misalignment of perceived and objective risk creates opportunities for insurance companies to profit. Pensioners, for example, feel themselves to be more at risk than the general population from burglary. But actuaries – studying the data – know that pensioners have lower risks than the general population (it helps, it seems, to have someone at home during the day). Hence home insurance policies targeted at pensioners are attractive to both the insurer and the insured.

A misalignment of perceived and objective risk is a form of “market failure”, where a successful intervention by government (or others) could improve social welfare. If trampers, for example, consistently under-estimate the objective hazards of a particular place, then suitable signage might close that gap. 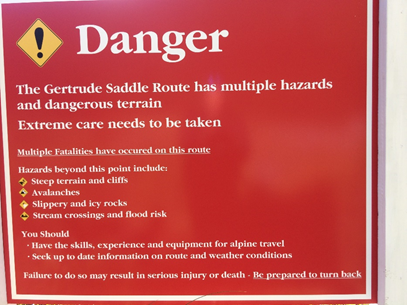 Misalignment can also run the other way. If people over-estimate the objective risk of vaccines and mobile phones, for example, then government interventions that brought those perceptions closer to the objective risk would encourage such people to join in the benefits offered by those technologies.

In the early stages of a pandemic, governments can reasonably act on the premise that the public under-estimates the risk of the disease. Providing better information should bring the average subjective risk more into alignment with the objective risk, encouraging people to adopt behaviour that improves their own safety.

This is true for personal risk, but what about risk to others?

Up to this point we have talked about personal risk, and risk to those close to us. But infectious diseases are different, because if we get infected, we are likely to infect others – including those we do not know.

So, others also bear costs from our choices – an “externality” in economists’ language. Recent research in the United States estimated that an individual looking out for their own interests would value the cost of an extra infection at US$80 000, while the full social cost is more like US$286 000.

Some people – let’s call them extreme altruists – may make a sufficiently large adjustment to their behaviour to cancel out this difference. That is, they may fully “internalise” the costs of their behaviour on others. But it’s a big ask that the population (on average) will take this step.

So, this would make the socially optimum level of subjective risk much higher than the objective risk. That is, the population will be better off if everyone acts as if the disease is more dangerous to them than it really is. This creates an attractive tactic for governments.

Governments can both influence and respond to perceptions of risk. In democratic societies, governments are expected to be responsive to the needs and desires of individual citizens, the voters. But good governments also care about the wellbeing of the population, and about using their available resources to make the largest improvement to that welfare.

At the present time it would appear that New Zealanders’ subjective perception of COVID-19 risk may exceed the objective risk they face. This may have been very helpful in encouraging people to self-limit risky behaviour, bring virus spread under control, and pursue a “social optimum” in the presence of externalities.

But the current situation is not without problems. There can also be adverse consequences from having the subjective risk level above the objective one. Loneliness, a significant social problem in its own right, might be exacerbated if people are unnecessarily fearful about the risk of social interactions. We know that some people have found the lockdown particularly challenging and may find it just as challenging returning to a semblance of normal life. It may be very difficult to restart some economic activities if people over-estimate the objective risk of their involvement. And if parents over-estimate the likelihood of their children catching COVID-19, they may be reluctant to send kids back to school, with adverse consequences for their ongoing education.

With the virus now under control, it may be time to “nudge” New Zealanders’ perceptions of risk to be more in line with the objective risk they face.

Notes
1. Research New Zealand surveyed 1000 people aged 18 years and older between 30 April and 3 May 2020. The maximum margin of error is +/- 3.1% (at the 95% confidence level). The sample was weighted by gender and age to ensure the results are representative of the population 18 years and over.
2. Presumably active cases are in hospital, quarantine or self-isolation, and thus unlikely to infect the general public. The most likely source of such infections is pre-symptomatic or asymptomatic individuals. Pre-symptomatic individuals will become active cases once symptoms develop, and asymptomatic individuals are likely to be identified via contact tracing should they infect others. If the number of pre-symptomatic or asymptomatic individuals currently exceeded the number of active cases, then we would expect the number of active cases to be rising. As the opposite is occurring, we think it’s reasonable to assume that the proportion of undetected infectious people in the wider population is lower than the proportion of active cases in the population.
3.Dave’s risk of having an accident in the mountains is higher than the population average, simply because he goes into the mountains. Good skills can lower that risk. Indeed, mountain safety education stresses the difference between subjective and objective hazards, and the importance of making a clear distinction. However, “feeling in control of one’s fate” leads people to under-estimate risk, partly counteracting the effect of mountain safety education.
4.We’ve used hospitalisation as a proxy for “serious illness”. According to New Zealand modellers, around 5% of infected individuals need to be hospitalised. See https://cpb-ap-se2.wpmucdn.com/blogs.auckland.ac.nz/dist/d/75/files/2017/01/Supression-and-Mitigation-Strategies-New-Zealand-TPM-1.pdf. The proportion is much higher for those aged over 70 or with a serious underlying health condition.
5.Average annual individual fatality rates for other causes are from https://www.eqc.govt.nz/sites/public_files/Report%20on%20Tsunami%20Risk%20facing%20New%20Zealand%20Aug%202015.pdf. While the rates for assaults, road and workplace accidents are derived from data, the tsunami and COVID-19 rates are modelled and thus highly reliant on assumptions. The point we are making here is that the likelihood of death from each of these sources is of roughly similar magnitude.
6. The case fatality rate for COVID-19 in New Zealand on 3 May was 1.76%, according to https://ourworldindata.org/grapher/coronavirus-cfr?country=AUS+NZL+OWID_WRL. In converting a monthly likelihood to an annual one we’ve assumed that 50% of encounters are repeats of those encountered in prior months.